To all of my Upstate NY Friends and family. I am thrilled to be guest starring on this fabulous concert with my friends Terese Genecco and Shaynee Rainbolt.

It promises to be a wonderful night and what a grand reunion it will be. Hope to see you there!

Big news for the August 1st Concerts for City Greens – the third concert of the season is a tribute to the music of rock ‘n roll legend, Neil Sedaka, featuring the man himself!!!

You’d better come early and bring your own chair on:  Wednesday August 1 at 6:30pm at Tudor City Greens. (Rain date: Thursday August 2 at 6:30pm.)  Paying tribute to the Brooklyn-born hit maker “Love Will Keep Us Together –  the Songs of Neil Sedaka” stars the ASCAP Award-winning singer-songwriter Jim Van Slyke, the MAC-winning harmony group Marquee Five, and the actress Carole Demas, co-star of TV’s Magic Garden, and the original Sandy in “Grease.”  Also appearing in this special tribute to Sedaka’s six decade-long career will be his niece, newcomer Holland Grossman, who makes her Broadway debut in “Rebecca.”

Come by for a wonderful afternoon of music at 3pm

Jim returns to NYC for his next performance of The Sedaka Show with special guest Neil Sedaka! July 21st and 22nd at 8:30pm at Feinstein’s at Lowes Regency. Check out the events page for more information or to purchase tickets. See you there!

Neil Sedaka and Jim Van Slyke are featured together on the July/August issue of the premiere cabaret magazine Cabaret Scenes! This comes after the success of Jim’s critically acclaimed The Sedaka Show. Check out the featured article, “Making Dreams Come True.” 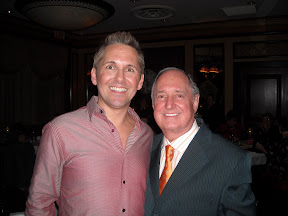 Welcome to my new site! I hope you enjoy all the new features like commenting, news feed, and more! Let me know what you think!